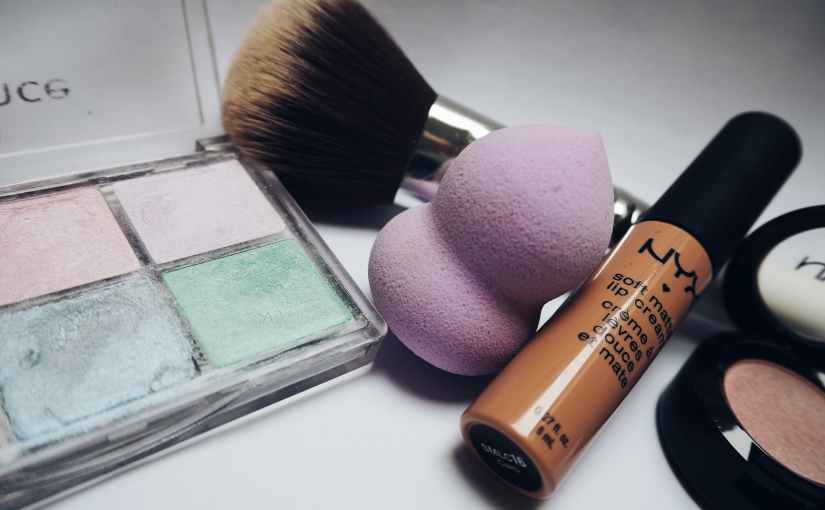 I’m taking a break from the saga of my beautiful baby to talk about the other thing I love. MAKE UP!!! I’ve been playing in it since I was 12 and I swear by mascara and red lipstick. On my worst, ugliest day if I can at least manage black mascara and red lipstick I feel better.  I love blending colors, I love finding new brushes, I ESPECIALLY love finding a good deal.

A little over a year ago I started switching everything over to cruelty free brands. I didn’t throw anything away but as things needed replaced or if I was going to splurge, I made sure it was cruelty free.  For the folks who don’t know, this means that it was not tested on animals and no animals were harmed to produce the product. Many CF products are vegan, but not all. If it contains beeswax, it can’t be called vegan as it’s an animal byproduct. Anyways, I got really into Wet N Wild make up. I used it in junior high, which is longer ago than I’m willing to admit and it was not good. My mom worked for Clinique so I used the Wet N Wild sparingly. It is sooooo good now. Seriously.

Last year they produced a box set of unicorn themed make up and I am so in love with all of it.  The highlighters were super pigmented, the liquid lipstick has fantastic staying power, it was quality.  They also came out with a line of make up meant for flash photography called PhotoFocus and I freaking love it.  It’s smooth, it’s long lasting and the brushes are really soft.

A few months ago they had a mermaid box come out and I missed it being back and forth in the NICU and I swore I would get the next box they did and I FREAKING MISSED IT. I’m so mad at myself. It’s super shimmer and called Goth-o-Graphic. It’s sparkly and black and skulls!!! WHY!? It was basically custom made for me and I missed it. I can buy the separate pieces but I want the dumb box. I want the shiny, holograpic skulls. I’ll have to try Ebay, but my feelings are hurt.

I’ve become a huge fan of Wet N Wild, they’ve stepped their game up, they make up is really nice, and most importantly they don’t test on animals.  I never really understood how bad it is on the animals.  I know that we use animals for a great deal of medical testing and I don’t see a way around that, but for something as frivolous as cosmetics, we don’t need to mess with beagles. Oh yeah, beagles. They are popular test animals due to their friendly and trusting nature. I won’t get too soap boxy, I have way too many contradictions in my dealings with mean and such but it’s at least one small thing I can do. Check out Rescue Freedom Project they used to be the Beagle Freedom Project but they upgraded. They do good work and I’ve given them some money in the past.

I haven’t go make up shopping since Bug was born, she really doesn’t care what I look like and we don’t really go many places because it’s flu season and she’s a micro preemie. I will say that looking nicer is on my list of things to do, I’m just so damn tired all the time. I’ll be well rested soon though, right???